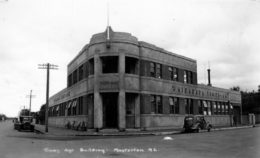 The Wairarapa Times-Age building shortly after construction in 1938

The building was designed by Wellington architects Mitchell and Mitchell, whose work was heavily influenced by Art Deco themes. It is very similar to the building which housed the Miami Herald although that building has been replaced by a modern one.

The Wairarapa Times-Age building is built of reinforced concrete and evokes a large cruise liner with a curving two-storey balconied entrance acting as the prow, while horizontal banding on the exterior of the building creates a sense of movement. The effect is enhanced by the shape of the building – reflecting that Cole Street runs at an oblique angle from Chapel Street rather than being square, the building has a triangular footprint. It cost £10,317.

The building has expanded over time. A 1961 extension allowed for extra editorial staff, a photographer’s room (including dark rooms) and more room for the library. By the time of the paper’s fiftieth birthday in 1988 it was employing 160 staff and printing over 10,000 copies each day.

Changes in the newspaper industry have affected all newspapers, particularly smaller ones. The Wairarapa Times-Age passed out of local ownership in 2002, being bought by Wilson & Horton, publishers of the NZ Herald. In 2004 the printing presses were silenced and the papers were printed off site.

In 2013 the building underwent more changes, being sold to a local developer who made internal improvements. The Wairarapa Times-Age is still the anchor tenant, and the newspaper is still published from the site, but the newspaper now uses less than half the building that carries its name.