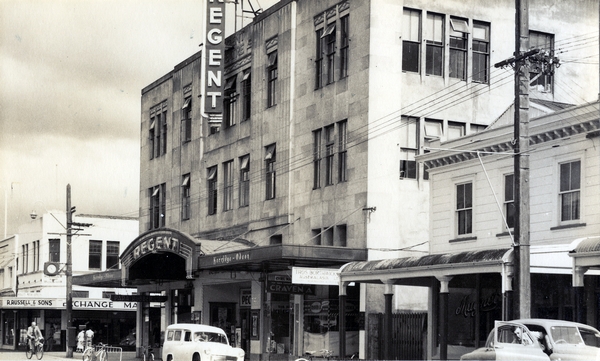 Masterton’s Regent Theatre has shown movies for over 80 years.

The movies were brought to Masterton in the late 1890s by travelling companies which displayed moving pictures as part of an entertainment programme, using various halls. Later, buildings were converted for use as picture houses – the Foresters Hall became the Thompson Payne Theatre, and the old Opera House was updated as a movie theatre. The first purpose built moving picture theatre was the Cosy, sited on the northern side of William Street.

On the western side of Queen Street, opposite the Central Fire Station, stood a butchers shop, known called the Record Reign butchery, later Ogilvy and Sons. In 1919 a new street, Jackson Street, was built, running alongside the butchery.

In 1930 the management of J.C Williamson’s announced their intentions to open a theatre in Masterton, on the corner of Jackson and Queen Street. The new theatre, to be known as the Regent, was the most impressive of the Masterton picture palaces, built at a cost of over £40,000, and seating over 1100 people.

The stage was massive, being one of the largest in the country at the time, well able to cope with the demands of live shows. The theatre was designed in Melbourne, by Charles Hollinshed, who was designing a number of similar theatres for Williamson’s.

The decoration of the auditorium was described as “artistic.” The mix of arabesque and Spanish decoration certainly made the Regent quite unlike any other Masterton building.

The management of the Regent was pleased to have a large opening ceremony on January 21, 1931. The audience who crowded into the theatre were much taken by the decoration – “Rich but not gaudy” one man said. The chairman of Williamson’s made a short speech to the audience, announcing 25 percent of the night’s takings were to be donated to the relief of distress among women and children of Masterton.

The Masterton mayor, Thomas Jordan, also spoke to the crowd, telling them that he thought movies were the marvel of the century. He was worried about the spread of movies, however. He thought the kind of films sent to Darkest Africa were a positive menace to the white race. He also said that he noted that in court, offenders were sometimes told that part of their sentence involved not going to the pictures. He hoped that the improvement in films would continue at such a pace that in the future a judge might sentence a young offender to go to the pictures at least twice a week!

Fortunately for the audience, the speeches were soon over, and the crowd settled down to see, and hear, Maurice Chevalier in The Big Pond.

One of the first managers of the Masterton Regent Theatre was Bert Irvine. In an interview conducted some years ago, he described his job as that of “caretaker, ticket-taker and house manager” of both the Cosy and Regent theatres, then being run in conjunction.

During the late 1930s, Saturday night was picture night in the town. Large crowds at the theatres meant large staff numbers as well. The Regent had a manager, a cashier, a doorkeeper, and seven ushers to show people to their seats. A new film would bring excitement to the town, with bookings essential for opening nights of the most popular.

The foyer was decorated for new films. When the ‘Moonlight Sonata’, with Padarowski, was playing in the Regent, a special display included a baby grand piano with the Moonlight Sonata score on the piano. One of the audience members, who turned out to be a music teacher, was taken with the display and played the whole sonata. She attracted such an audience that the film had to be postponed until she finished.

The theatre suffered badly in the 1980s with falling numbers of patrons. In the 1990s it was converted to a triplex, with space set aside for a live theatre space at some time in the future.