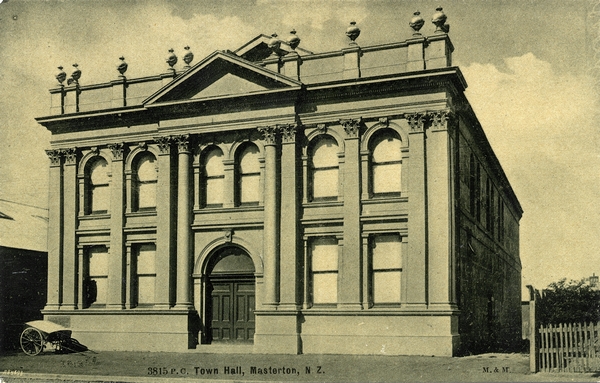 Masterton’s second Town Hall was built in 1897. It became known as the Opera House.

Masterton had been without an official town hall for over ten years in 1895, and the Theatre Royal that had served the purpose was not up to the task. The Masterton Trust Lands Trust decided to act. On 21 May 1897, one day short of the 43rd anniversary of the settlement of the town, the early settler Alfred Renall performed one of his last public functions as he laid the foundation stone for the new hall.

Architects Penty and Forde designed and oversaw the construction of the tall brick structure which was faced with concrete to appear as though it were made stone, and had room for 1000 seats. There was a generous stage, dressing rooms and an orchestra pit. The upstairs gallery was fitted out with 250 special chairs with leather upholstery, while movable chairs were placed on the floor beneath when needed.

The hall, which was declared open in February 1898, was immediately pressed into service. As well as the usual travelling companies bringing their various productions, and local amateur groups coalescing to stage operettas, the hall also hosted ‘Cinematograph’ shows, forerunners of modern motion pictures.

Although called the Town Hall, the hall was especially constructed to house entertainments, and it wasn’t long before it was referred to as the Opera House.

The Opera House’s role changed over the years. As travelling troupes became less and less frequent, and as the movies became more popular, the Opera House was adapted to take advantage of the new craze. In 1911 an electric power supply was added to the hall, courtesy of a noisy gas-powered generator behind the hall, and the hall was lit by 250 electric lights. A searchlight was also added to the roof, although there were concerns about the safety of the light. The operator was told to ensure that he didn’t frighten horses by flashing the searchlight down the streets. In 1912 the Masterton Picture Company took over the lease of the Opera House, showing films every night that the hall wasn’t booked for other purposes.

The Opera House was at the peak of its popularity. The motion picture shows ensured a steady income, and it was also well used as a concert hall. When the first “talkies” arrived, queues formed down Lincoln Road to gain entrance.

The Opera House was given a rude shake on 5 March 1934, being severely damaged in the Pahiatua earthquake. The ornate frontage was badly compromised and the hall was declared unsafe. Repairs proved expensive and difficult to finance, and the hall did not reopen until June 1937.

Its rejuvenation was not to be long-lived, as it was once more damaged by earthquake, in June 1942. This time the damage was more substantial, and the costs of restoring it were prohibitive.

In 1946 the stage and the gallery were removed and the shell of the building was used as a depot for the Railways Road Services. In 1953 a fire gutted the building and the roof was destroyed. The building was once more renovated and restored. It continued as a bus depot until 1988, when Road Services consolidated operations at the Masterton Railway Station. Later that year the hall was leased as an auction mart, a function it fulfilled until being demolished as an earthquake risk in 2012.