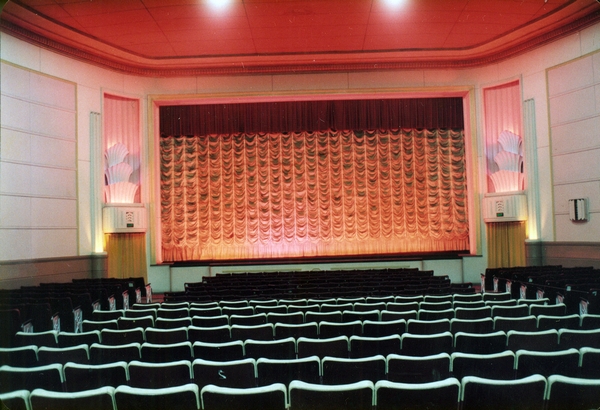 The interior of the State Theatre was more restrained than the roccoco Regent Theatre.

For a long time the New Zealand movie business was dominated to two large firms – Williamsons (later to be taken over by Kerridge-Odeon) and Amalgamated Theatres. When Williamson’s built the rococo-styled Regent Theatre in 1930, it was only a matter of time before Amalgamated were also in business in Masterton.

In the mid-1930s Amalgamated were on a theatre building and buying spree. In the space of four months in 1935, eight new theatres were opened, bringing their number to 67, but the State Theatre in Masterton was built by a local consortium of businessmen, and leased to the theatre chain.

The building was co-designed by Aucklander George Tole and Masterton-based architect Fred Daniell. Daniell, a son of C.E. Daniell, was returning to Wairarapa after an extended period in Waikato, and used the upper storey of the theatre for his business headquarters. He kept a good record of the progress of the building, including shots of various theatres in the lower half of the North Island that he visited for design ideas. He then photographed the stages of the building project, the first in Masterton using reinforced concrete to new standard introduced after the Napier earthquake of 1931.

In the end the building was quite different to the Regent Theatre. It was unashamedly modern – built in the Art Deco style it featured an illuminated fountain in the front foyer and restrained decoration on the interior of the chamber. Unlike the Regent, it was not designed for live theatre.

At the opening ceremony, held at half time during the first showing on 17August 1935, Masterton’s mayor, Thomas Jordan spoke, this time stressing the international nature of film. He also talked about juvenile offenders being told to keep away from films, as they were a bad influence. He said he hoped that, following an increase in the quality of movies, offenders might be sent “to the State Theatre at the State’s expense”.

The State Theatre closed its doors on the movie business in October 1984. The front of the building still houses a number of commercial businesses, while the first floor office space had been converted for living quarters. The rear is used for storage.